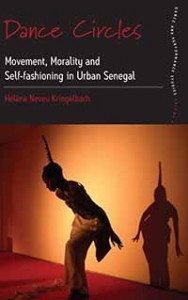 Joint winner of the 2013 Amaury Talbot Prize for African Anthropology and winner of a Special Citation for the 2013 de la Torre Bueno Dance Book Award given by the Society of Dance History Scholars.

“I enjoyed reading this book, which is very well written, focuses on a well-selected range of performance practices in Senegal and makes an interesting contribution to studies in that field. [It] provides intelligent analysis of performances by relating them in interesting and innovative ways, but its main strength lies in… offering wonderful ethnographic detail that brings out the contested nature of dance in relations between dancers and their audiences.”  ·  Ferdinand de Jong, University of East Anglia

“This is an absolutely first-class study. It ranges across space, genre and time, though with contemporary Senegalese perspectives always to the fore. It is artfully narrated, and the voice of a well-qualified and extremely thoughtful author is clear and distinct throughout. I would put it at the forefront of dance studies today, and it also makes a valuable contribution both to anthropological thinking about expressive culture, and to West Africa studies in general.”  ·  Martin Stokes, King’s College, London

Senegal has played a central role in contemporary dance due to its rich performing traditions, as well as strong state patronage of the arts, first under French colonialism and later in the postcolonial era. In the 1980s, when the Senegalese economy was in decline and state fundingwithdrawn, European agencies used the performing arts as a tool in diplomacy. This had a profound impact on choreographic production and arts markets throughout Africa. In Senegal, choreographic performers have taken to contemporary dance, while continuing to engage with neo-traditional performance, regional genres like the sabar, and the popular dances they grew up with. A historically informed ethnography of creativity, agency, and the fashioning of selves through the different life stages in urban Senegal, this book explores the significance of this multiple engagement with dance in a context of economic uncertainty and rising concerns over morality in the public space.

Hélène Neveu Kringelbach is a Lecturer in African Studies at University College London. From 2011-13 she was one of the project leaders in the Leverhulme-funded Oxford Diasporas Programme. Part of her research focuses on dance, musical performance, and popular culture in Senegal and in the diaspora. She has also co-edited Dancing Cultures: Globalization, Tourism and Identity in the Anthropology of Dance (Berghahn Books, 2012).